Losing money is always hard. But living to rebuild is more important. 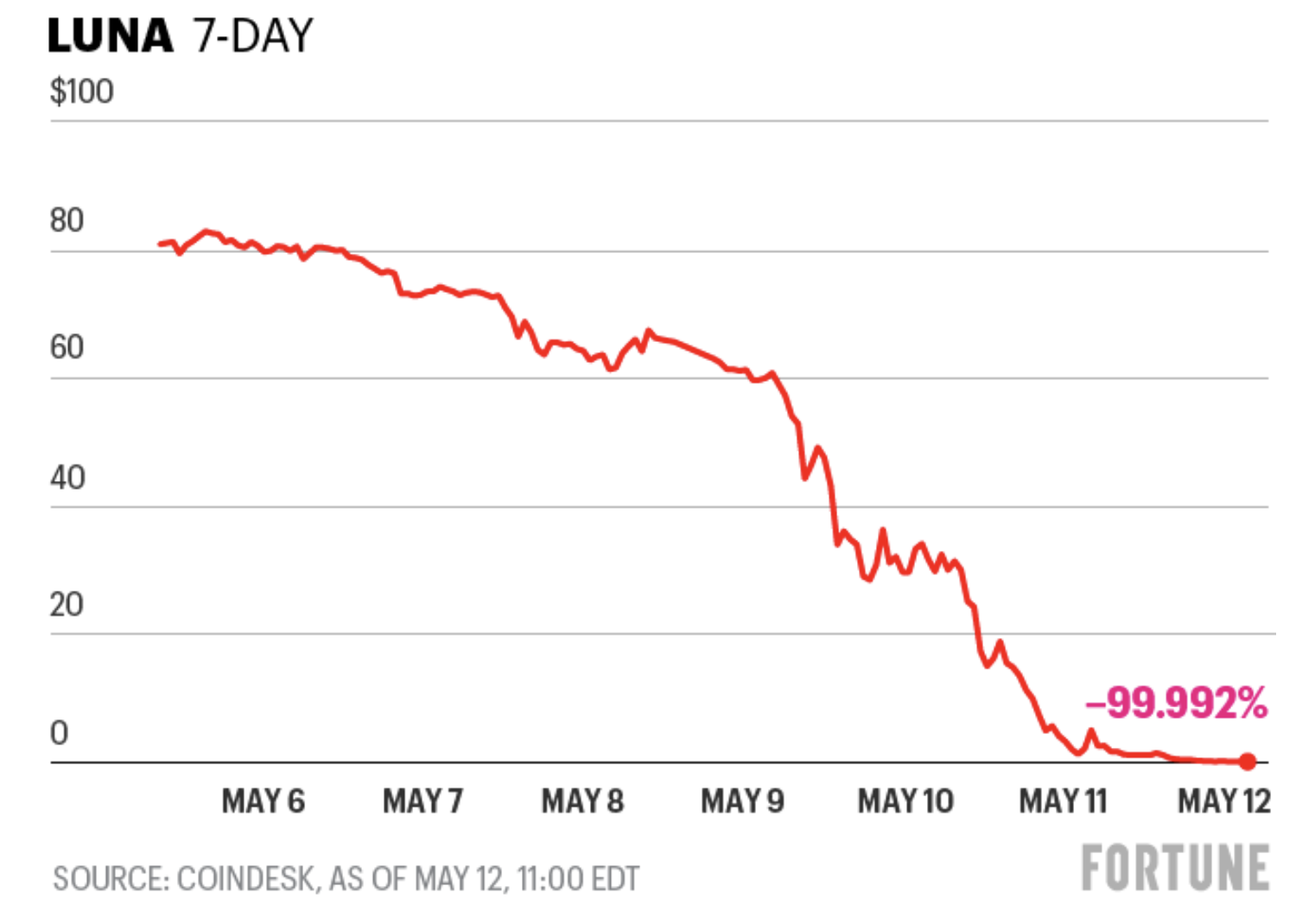 Last week was possibly one of the hardest weeks for investors. The UST/LUNA collapse reverberated across the wider crypto markets, causing Bitcoin’s price to break below $30,000 – a level not seen since late 2020. Even stock markets didn’t do too well, with the CNN Fear & Greed Index hitting single digits last week. If you’re among those who lost money, take heart that this too, will pass. In the meantime, seek support, stay strong and keep building.

2 of the top 10 cryptocurrencies lost its value last week, sending shockwaves across the wider crypto market.

TerraUSD (UST), an algorithmic stablecoin that should always be worth US$1, lost its peg to the U.S. dollar last week. Its sister coin, Terra LUNA, was not spared as it lost over 99% of its value, despite having peaked close to $120 not too long ago.

While the postmortem analysis and investigations are still ongoing, a quick summary is that the equivalent of a bank run occured, as people panicked and rushed to pull their money (UST/LUNA) out. Although the algorithm was designed and built with a stabilizing effect, it failed as too many investors were liquidating their assets at the same time and at a volume larger than the smart contracts could execute.

Every time $1 of UST is sold, $1 of LUNA is burnt, which reduces its supply and hence LUNA’s price goes up. Too much UST was being sold at the same time, which meant a massive amount of LUNA was being minted to support it, causing further downward pressure on LUNA. When the peg had yet to stabilize after a few hours (as it previously did), this then started to feed on itself as people started panicking and selling both UST and LUNA at the same time.

For the last 12 months, I’ve watched as the Terra ecosystem grew and demand for UST continued rising, with new applications and protocols being launched on top of its network. The LUNAtics community was the strongest I’d seen in a long time, and community counts for a lot in crypto because it drives and affects sentiment. Even conservative folks were putting their money in Anchor Protocol, the savings pool on the Terra blockchain which offered close to 20% APY.

As a result, UST went from becoming a “fairly new” stablecoin to earning its place among the top few stablecoins because of the sheer demand for it. It was a huge success, and gave some semblance of hope that perhaps, crypto could thrive on its own without a government-backed stablecoin, which runs contrary to what decentralized finance stands for anyway.

But as the events played out, many people could not get out in time because it happened too quickly. Some had their LUNA / UST locked in staking protocols (in exchange for a yield) and could not simply pull it out immediately (staking on Terra Station, for instance, has a 21-day waiting period). Others were stuck by the centralized exchanges they used, which halted trading or withdrawals (e.g. Binance) meaning they couldn’t do anything about their positions but just stand by and watch as prices started free-falling further.

Yours truly was not spared in the massacre. Although I had sized my position in LUNA accordingly and knew of the possible risks involved (UST depeg, a theoretical bank spiral, bank run, etc) and only put in money I could prepare to lose, I had assessed the risks to be low and did not believe it would actually happen. Even when the depeg first started, I thought it would recover soon, as it wasn’t the first time it / a stablecoin had depegged (and on all prior instances, they all recovered).

It hurts when your thesis breaks and you lose money, but this is a solemn reminder to myself that nothing in investing is ever 100%.

The losses have set me back by about 6 months, but I’m not going to give up, and neither should you.

Key lessons from the collapse

Be kind to everyone who’s suffering during this period

If you need help or a listening ear, be sure to reach out to your friends and family. Money can always be earned back, but your life cannot, and you may not always realize how important you are to your loved ones.

Everything always seems perfect on hindsight, but the best we can do is to learn from this collapse, pick ourselves up and carry on.

There are still bargains to be found, and money to be made.

Stay strong everyone. The bear market will pass, as it always will.

Seeing red? Here’s what you can do for your investments now.