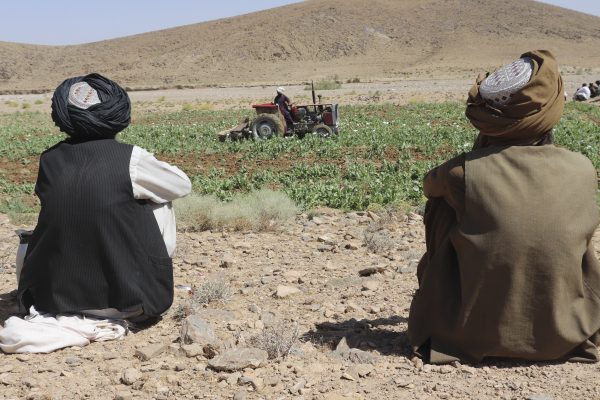 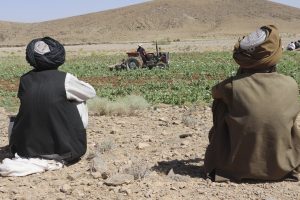 Taliban eradicate a poppy field in Washir, district of Helmand province, Afghanistan, Sunday, May 29, 2022. Afghanistan’s Taliban rulers have begun a campaign to eradicate poppy cultivation, aiming to wipe out the country’s massive production of opium and heroin, even as farmers fear their livelihoods will be ruined at a time of growing poverty.

Afghanistan’s Taliban rulers have begun a campaign to eradicate poppy cultivation, aiming to wipe out the country’s massive production of opium and heroin, even as farmers fear their livelihoods will be ruined at a time of growing poverty.

On a recent day in Washir district in southern Helmand province, armed Taliban fighters stood guard as a tractor tore up a field of poppies. The field’s owner stood nearby, watching.

The Taliban, who took power in Afghanistan more than nine months ago, issued an edict in early April banning poppy cultivation throughout the country.

Those violating the ban “will be arrested and tried according to Sharia laws in relevant courts,” the Taliban deputy interior minister for counternarcotics, Mullah Abdul Haq Akhund, told The Associated Press in Helmand’s provincial capital, Lashkar Gah.

Afghanistan is the world’s biggest opium producer and a major source for heroin in Europe and Asia. Production spiraled over the past 20 years despite billions of dollars spent by the U.S. trying to stop poppy cultivation.

But the ban will likely strike a heavy blow to millions of impoverished farmers and day laborers who rely on proceeds from the crop to survive. The ban comes as Afghanistan’s economy has collapsed, cut off from international funding in the wake of the Taliban takeover. Most of the population struggles to afford food, and the country has been suffering under its worst drought in years.

Noor Mohammed, who owns one poppy field in Washir that was torn apart by Taliban tractors, said his plot of land is small and lacks water, so he can’t survive by growing less profitable crops.

“If we are not allowed to cultivate this crop, we will not earn anything,” he said of his poppies.

Day laborers can earn upwards of $300 a month harvesting opium from the poppies. Villagers often rely on the promise of the upcoming poppy harvest to borrow money for staples such as flour, sugar, cooking oil and heating oil.

Helmand is the heartland of poppy cultivation in Afghanistan. It appeared the new eradication campaign was targeting mainly those who planted their crops after the ban was announced. Many others who had planted earlier succeeded in harvesting, going from plant to plant, slicing the poppy’s bulb, then scooping up the sap that oozes out, the raw material for opium.

Akhund, the deputy interior minister, said the Taliban were in touch with other governments and non-governmental organizations to work out alternative crops for farmers.

Interior Ministry spokesman Abdul Nafi Takor said the eradication campaign will take place across the country. “We are committed to bringing poppy cultivation to zero,” he told the AP.

It’s not known how many poppies were planted this season, how much was harvested and how many fields the Taliban have eradicated so far.

But Afghanistan’s production has steadily risen, reaching new heights every year in recent years. In 2021, 177,000 hectares (438,000 acres) were planted with poppies, yielding enough opium to produce up to 650 tons of heroin, according to estimates by the U.N.’s Office on Drugs and Crime. That was an increase from up to 590 tons of heroin in 2020.

The total value of Afghanistan’s opiates production in 2021 was $1.8-$2.7 billion, up to 14 percent of the country’s GDP, exceeding the value of its legal exports, the UNODC said in its most recent report.

During their first time in power in the late 1990s, the Taliban also banned poppy cultivation and with a fierce campaign of destroying croplands nearly eradicated production within two years, according to the United Nations.

However, after the U.S.-led invasion that ousted the Taliban in 2001, many farmers returned to growing poppies.

Over the next nearly 20 years, Washington spent more than $8 billion trying to eradicate Afghan poppy production. Instead, it only steadily increased: In 2002, around 75,000 hectares were planted with poppies, producing some 3,400 tons of opium. Last year, production was double that.

Today, Afghanistan’s opium output is greater than all other opium-producing countries combined. Nearly 80 percent of the heroin produced from Afghan opium reaches Europe through Central Asia and Pakistan.

7 Stunning Houseplants That Are Almost Impossible to Kill