Why SPACS Are Flailing as Market Conditions Shift 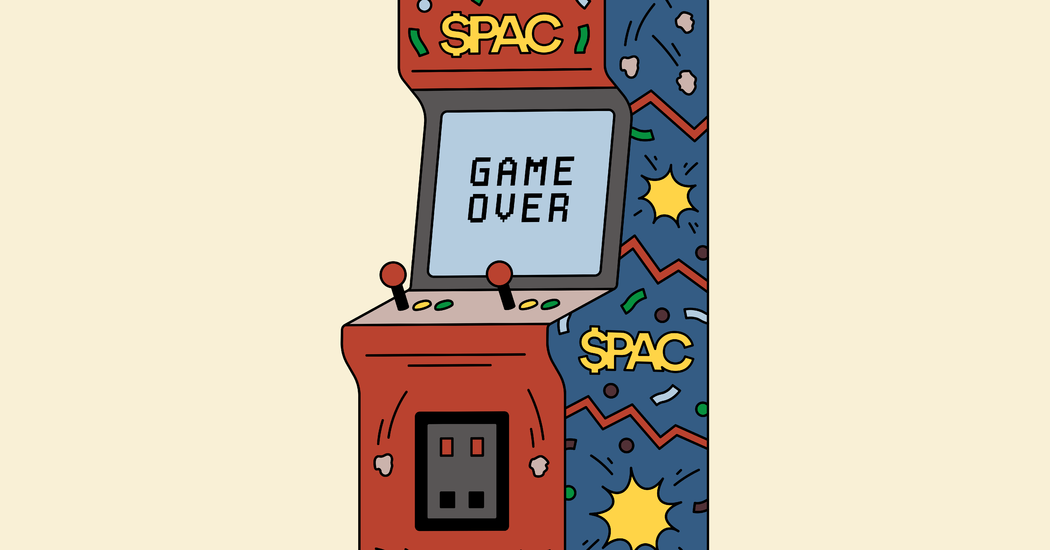 So it was no surprise that in November 2020, Mr. Higgins embraced one of Wall Street’s biggest recent obsessions by launching a SPAC. Special purpose acquisition companies — known by their acronym — are shell entities that sell shares to the public and use those funds to buy an operating business. Investors get their money back if the SPAC hasn’t found a business to buy within a two-year window.

Last summer, Omnichannel Acquisition, the SPAC backed by Mr. Higgins, agreed to buy Kin Insurance, a fintech company. But in January, the two sides called off the deal, citing “unfavorable market conditions.” In May, Mr. Higgins decided he’d had enough. He is liquidating Omnichannel and returning the $206 million his SPAC raised to investors.

“We did months and months of work to get Kin ready to go,” Mr. Higgins said. “But the market completely turned on us.”

After two hot and heavy years, during which investors poured $250 billion into SPACs, rising inflation, interest rate increases and the threat of a recession are fomenting doubts. Increasingly, investors are withdrawing their money from SPACs, which they’re allowed to do at the time of the merger. With stocks of high-growth companies recently getting clobbered, they have been less willing to bet that SPAC mergers — which often involve risky companies — will be successful.

At the same time, regulators are stepping up scrutiny of SPACs. The Securities and Exchange Commission has opened dozens of investigations into SPACs and is proposing tighter rules. Increased regulation would make SPAC deals less profitable for the big investment banks that arrange these transactions, because they would have to commit more resources to comply. They, too, have begun pulling back.

“You could see this cliff coming,” said Usha Rodrigues, a professor of corporate law at the University of Georgia School of Law who has emerged as a leading expert on SPACs.

The wreckage is piling up.

On Tuesday, Forbes Media became the latest company to scrap its planned merger with a SPAC. Around 600 SPACs that went public in the past couple of years are still trying to complete deals, according to data from Dealogic. Roughly half of them might not find targets before their two-year window closes. At least seven SPACs have folded since the beginning of the year. Another 73 SPACs that were waiting to go public have shelved their plans. A fund that tracks the performance of 400 SPACs is down 40 percent over the past year.

Although SPACs had been around for decades, they long had an unsavory reputation. Only companies whose financials wouldn’t survive investor scrutiny en route to a traditional initial public offering used SPACs to go public. That changed at the beginning of 2020, when prominent financial firms, venture capitalists and hot start-ups embraced SPACs as a faster and easier route to the public markets than an I.P.O.

Wall Street banks were only too eager to arrange these cookie-cutter deals for hefty fees. And investors desperate for returns enthusiastically bought in.

Suddenly, everyone from hedge fund managers like Bill Ackman to celebrities like Patrick Mahomes, the N.F.L. quarterback, and Serena Williams, the tennis legend, jumped on the SPAC bandwagon. Retail investors got involved, too, as stock trading took off during the pandemic. Even former President Donald J. Trump struck a deal with a SPAC last year to take his fledgling social media company public.

“Why did V.C.s turn to SPACs all of a sudden? Because reputable investment banks started underwriting them,” said Mike Stegemoller, a finance professor at Baylor University.

SPAC deals have been an important new source of revenue for Wall Street banks. Since the start of 2020, the top 10 banks arranging the public offerings of SPACs made just over $5.4 billion in fees, according to Dealogic. Citigroup, Credit Suisse and Goldman Sachs pocketed the biggest fees.

Companies that sell shares to the public through an I.P.O. have to undergo a rigorous process with strict rules. But SPACs face few regulations, since the companies going public have no actual operations yet. The shares are usually priced at $10 apiece.

Early investors also get warrants, a type of security that gives them the right to buy additional shares later at a predetermined price. If shares of a SPAC go up after it finds a merger partner, warrants can be financially rewarding.

The SPAC has two years to find an operating business to buy; otherwise, the money has to be returned to investors. Since investors don’t know what business a SPAC will end up buying, they have the option of redeeming their shares when they vote on the merger — meaning that the merged entity could end up with far less cash than the SPAC raised.

The SPAC boom was fueled by a long period of low interest rates, which drove investors to riskier corners of the market in search of higher returns. SPACs became especially popular with hedge funds that were looking to profit off the difference between the price of a share in a SPAC and the warrants they held.

The SPAC format also provided a lifeline to companies like WeWork, which had to pull its I.P.O. in 2019 when investors balked at the office sharing company’s financials. But that was not an obstacle when WeWork merged with a SPAC last year and got $1.3 billion in badly needed capital.

“Last year was one of the best years in terms of SPACs,” said Gary Stein, a former investment bank analyst and entertainment industry consultant who has invested in such companies for nearly three decades. “This year is probably one of the more difficult ones for me to navigate.”

Two things have cooled the ardor for SPACs. Inflation is skyrocketing, prompting the Federal Reserve to raise interest rates and investors to pull their money out of SPAC deals to park elsewhere. And regulatory scrutiny of the SPAC market is increasing, which has made these deals less enticing for the players involved.

In recent months, investors have invoked more frequently their contractual right to redeem their shares in a SPAC. Historically, around 54 percent of shareholders would opt to redeem shares when a merger was announced. Now, as many as 80 percent of investors have sought their money back in some instances — a move that leaves the postmerger company with little of that promised capital.

Concerns that too many investors would seek to get cash for their shares torpedoed the merger between Kin Insurance and Omnichannel, Mr. Higgins’s SPAC. The media company BuzzFeed took in only $16 million from its merger with a SPAC, as investors reclaimed much of the $250 million it hoped to get.

Some SPAC mergers completed recently are looking grim. When MSP Recovery, a medical litigation and claims firm, closed its SPAC deal with Lionheart Acquisition Corporation II on May 24, the company’s shares fell 53 percent immediately. They are now trading around $2. Neither Lionheart nor MSP Recovery returned requests for comment.

The Securities and Exchange Commission has opened two dozen investigations involving SPACs since January 2020, according to Audit Analytics. A half-dozen involve electric vehicle companies, including Lordstown Motors, Lucid and Faraday Futures. The SPAC seeking to merge with Mr. Trump’s company is also under investigation.

Regulators have proposed rules that would make it easier for shareholders to sue companies that merged with a SPAC for making fanciful financial projections and dubious claims about production capabilities. Banks could also face increased liability for their work on such deals.

On Tuesday, Senator Elizabeth Warren of Massachusetts released a report that focused on conflicts of interest involving certain players in SPAC deals. “The process of bringing a SPAC to market inherently favors institutional investors and financial institutions — the so-called ‘SPAC mafia’ — over retail investors,” according to the report.

Some Wall Street banks are now stepping away from SPACs, concerned that they will be held liable in shareholder lawsuits for overhyped financial projections made by private companies that merge with a SPAC.

Goldman has reduced its involvement with SPACs partly because of the “changed regulatory environment,” said Maeve Duvally, a spokeswoman for the bank.

Ms. Rodrigues, the law professor, said that if Wall Street banks could be held liable for false statements made by a company that was merging with a SPAC, it would be similar to the liability they have when arranging a traditional I.P.O. Increased regulation would lead to higher costs for banks and higher fees for clients, which would dampen enthusiasm for SPACs, she said.

Of the roughly 600 SPACs still out there scrambling to find targets before the market shuts down entirely, 270 have been looking for at least a year, according to Dealogic.

Backers of those companies are desperate, which could make them less than judicious in choosing merger partners, said Nathan Anderson of Hindenburg Research, a firm that specializes in publishing critical reports about publicly traded companies including SPACs.

“The quality of SPAC deals was never high to begin with,” Mr. Anderson said. “And now it has the potential to get substantially worse.”

How to Get A Free $75 By Setting Up A Direct Deposit?

Investment Products from Jiraaf: Should you invest?

How to Get A Free $75 By Setting Up A Direct Deposit?

Investment Products from Jiraaf: Should you invest?