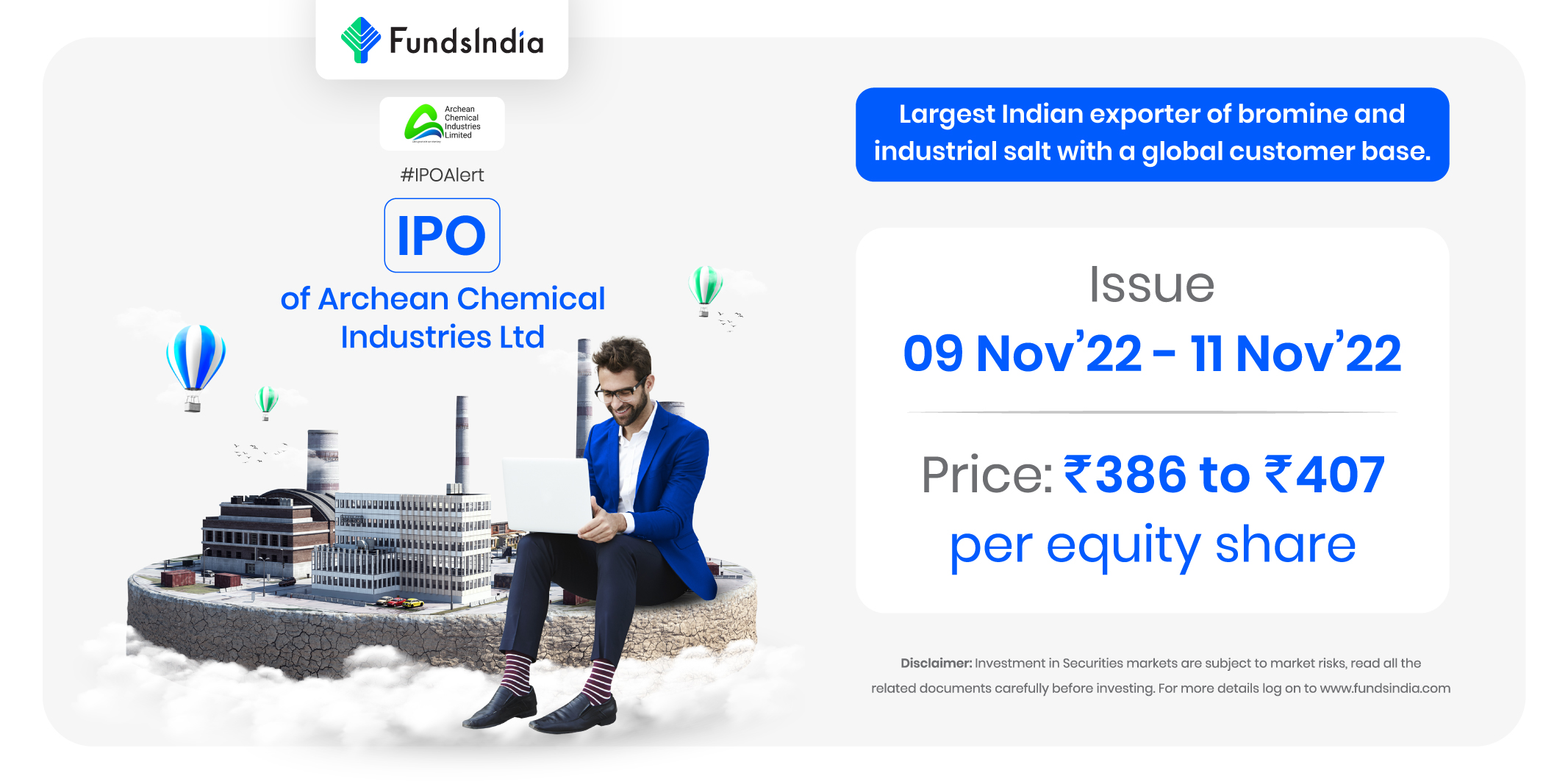 Archean Chemical Industries is a leading specialty marine chemical manufacturer in India and focused on producing and exporting bromine, industrial salt, and sulphate of potash to customers around the world. It produces its products from its own brine reserves in the Rann of Kutch, located on the coast of Gujarat, and manufactures its products at its facility near Hajipir in Gujarat. The key geographies for exports include China, Japan, South Korea, Qatar, Belgium, and the Netherlands. The bromine produced by Archean is used as key initial-level material, which has applications in pharma, agrochemicals, water treatment, flame retardant, additives, oil & gas, and energy storage segments. Industrial salt is an important raw material used in the chemical industry for the production of various other chemicals and compounds and sulphate of potash is used as a fertilizer and also has medical uses to reduce the plasma concentration of potassium when hypokalaemia occurs.

Objects of the Offer:

Market Leading Positions: The company is a leading specialty marine chemical manufacturer since 2013 in India, focused on producing and exporting bromine, industrial salt, and ‘sulphate of potash’ to customers around the world. The company is the largest exporter of bromine and industrial salt by volume in India in FY21 and has amongst the lowest cost of production globally in both bromine and industrial salt. It is also the only manufacturer of ‘sulphate of potash’ from natural sea brine in India. Sulphate of potash, also known as potassium sulphate, is a high-end, specialty fertilizer for chlorine-sensitive crops and also has medical uses. The specialty marine chemicals industry in which the company operates has high entry barriers, which include the high cost and intricacy of product development, manufacturing, and investment in salt beds. These factors protect the company from the entry of new competitors.

Strong Clientele: As of June 30, 2022, the company had 18 global customers and 24 domestic customers. Its major customers include, for industrial salt, Sojitz Corporation (which is also a shareholder of the Company), Wanhau Chemicals, and Qatar Vinyl Company Limited; and for bromine, Shandong Tianyi Chemical Corporation, and Unibrom Corporation. The company has a long-term offtake agreement with Sojitz Corporation of Japan for 2 million tonnes of industrial salts per annum. The company has also added new customers in recent fiscals offering repeat orders and ensuring sustained revenue contribution from the segment.

Redemption Risk – Company has issued certain listed and redeemable NCDs on certain specified terms and conditions aggregating to Rs.840 crs. As on September 30, 2022, the amount outstanding under the borrowing arrangements entered into by the Company was Rs.699 crs. The company also proposes to utilise an estimated amount of Rs.644 crs from the Net Proceeds towards redemption or earlier redemption of NCDs issued by the Company either in full or in part, and the interest accrued therein if any. The company’s inability to comply with repayment and other covenants in its financial agreements could adversely affect its business.

Though the company has a monopoly kind of status in one of its products, the listed peers according to the company’s RHP (Red Herring Prospectus) are Tata Chemicals, Neogen Chemicals, Deepak Nitrite, and Aarti Industries. At a higher price band, the listing market cap will be around ~Rs.4725 crs, and Archean is demanding a P/E multiple of 25x based on FY22 EPS and 14x based on annualised Q1FY22 EPS. While comparing the P/E with its listed peers, the company seems to place itself between the undervalued to fairly valued categories. The leadership position and low-cost production offer the company some competitive advantages such as product pricing, economies of scale, etc. resulting in massive financial growth for the company. Based on the above views, we provide a ‘Subscribe‘ rating for this IPO.

If you are new to FundsIndia, open your FREE investment account with us and enjoy lifelong research-backed investment guidance.

Is Credit Card Interest Tax Deductible for a Business?

Is Credit Card Interest Tax Deductible for a Business?