Eurozone Inflation Hits Highest Level Since Creation of the Euro 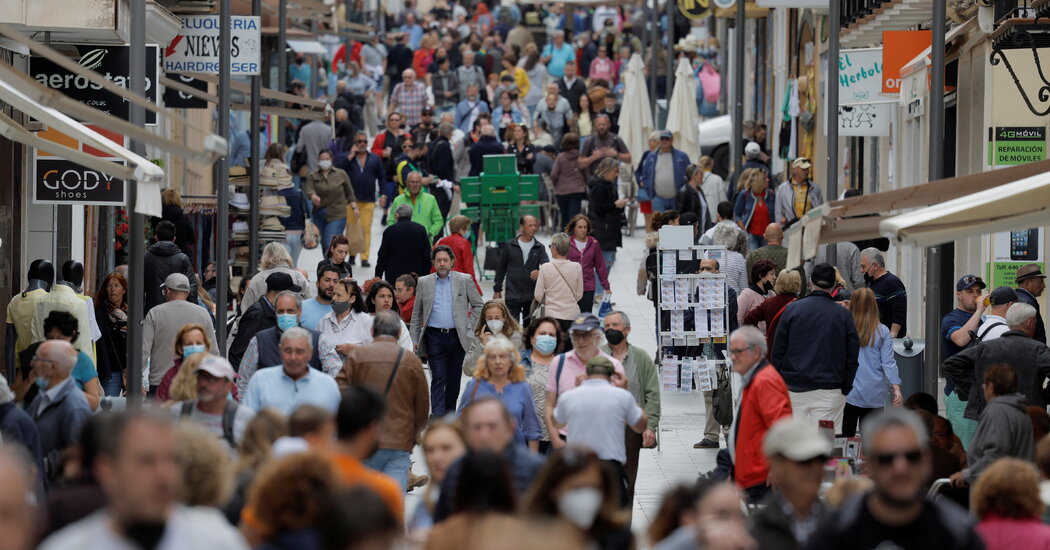 Inflation in the euro area in May hit its highest annual level since the creation of the euro currency in 1999, Europe’s statistics agency reported on Tuesday, as a record run-up in energy and food prices stoked by Russia’s war in Ukraine continued to ricochet through the continent’s economy, raising the specter of a lapse into recession.

Annual inflation in the 19 countries that use the euro currency jumped to a record 8.1 percent in May, from 7.4 percent in April. Prices have been rising for 10 consecutive months and show few signs of letting up, deepening a cost-of-living crisis for consumers and forcing European policymakers to pledge a variety of measures to blunt the pain. In the United States, consumer price inflation has reached 8.3 percent, data from April showed, a slight moderation from previous months.

The European Commission recently lowered its economic growth forecasts to 2.7 percent this year, from the 4 percent estimated in winter. At the same time, inflation is hitting record levels and is expected to average 6.8 percent for the year, the commission forecast, leading a growing number of economists to warn that Europe may tip into a sharp slowdown or outright recession before the end of the year.

As inflation rates have climbed, the European Central Bank has sped up its policy response and said the era of negative interest rates could be over as soon as September.

Energy costs remain the single biggest factor pushing up prices for consumers and businesses, rising in May by a record 39.2 percent from a year earlier, while processed food, alcohol and tobacco rose 7 percent.

European leaders reached a political deal early Tuesday on an embargo on most Russian oil imports, a once unthinkable measure that is aimed at punishing Russia but that economists say will also further hurt European households and industry by pushing prices even higher.

Germany, Europe’s biggest economy, has been among the hardest hit, with inflation there rising to 8.7 percent. France (5.8 percent), Spain (8.5 percent) and Italy (7.3 percent) also saw consumer prices continue a monthslong climb, prompting lawmakers in those countries to offer caps on energy prices or rebates for low-income households to offset the cost of gas and diesel.

In Germany, starting in June, for example, the government will offer reductions for the price of gas at the pump and a monthly $10 ticket for public transport across the country.

The rise in energy costs has had by far the biggest impact on countries closest to Russia’s borders. Inflation in Estonia, for example, which previously weaned itself off Russian gas but is now subject to volatile market swings in energy prices, surged by an eye-popping annual rate of 20.1 percent, nearly double the 11 percent recorded in January. In Lithuania, annual inflation rose to 18.5 percent, and in Latvia, it reached 16.4 percent.

The Russia-Ukraine War and the Global Economy

A far-reaching conflict. Russia’s invasion on Ukraine has had a ripple effect across the globe, adding to the stock market’s woes. The conflict has caused​​ dizzying spikes in gas prices and product shortages, and is pushing Europe to reconsider its reliance on Russian energy sources.

Global growth slows. The fallout from the war has hobbled efforts by major economies to recover from the pandemic, injecting new uncertainty and undermining economic confidence around the world. In the United States, gross domestic product, adjusted for inflation, fell 0.4 percent in the first quarter of 2022.

Russia’s economy faces slowdown. Though pro-Ukraine countries continue to adopt sanctions against the Kremlin in response to its aggression, the Russian economy has avoided a crippling collapse for now thanks to capital controls and interest rate increases. But Russia’s central bank chief warned that the country is likely to face a steep economic downturn as its inventory of imported goods and parts runs low.

Trade barriers go up. The invasion of Ukraine has also unleashed a wave of protectionism as governments, desperate to secure goods for their citizens amid shortages and rising prices, erect new barriers to stop exports. But the restrictions are making the products more expensive and even harder to come by.

Prices of essential metals soar. The price of palladium, used in automotive exhaust systems and mobile phones, has been soaring amid fears that Russia, the world’s largest exporter of the metal, could be cut off from global markets. The price of nickel, another key Russian export, has also been rising.

In the past year, as inflation began to rise, some European Central Bank policymakers were reluctant to act while wage growth across the region was subdued. But as consumer prices have kept climbing and have spread to more goods and services, the bank is ramping up its process of so-called policy normalization.

By early July, the bank is expected to end its large bond-buying program, and then begin raising interest rates for the first time in more than a decade. Last week, Christine Lagarde, the bank’s president, laid out in unusually clear terms the expected path for interest rate increases — signaling raises in July and September.

The bank’s chief economist, Philip Lane, recently said increases were likely to be a quarter of a percentage point at a time, but some policymakers have suggested that a larger-than-normal increase, of half a percentage point, might be warranted.