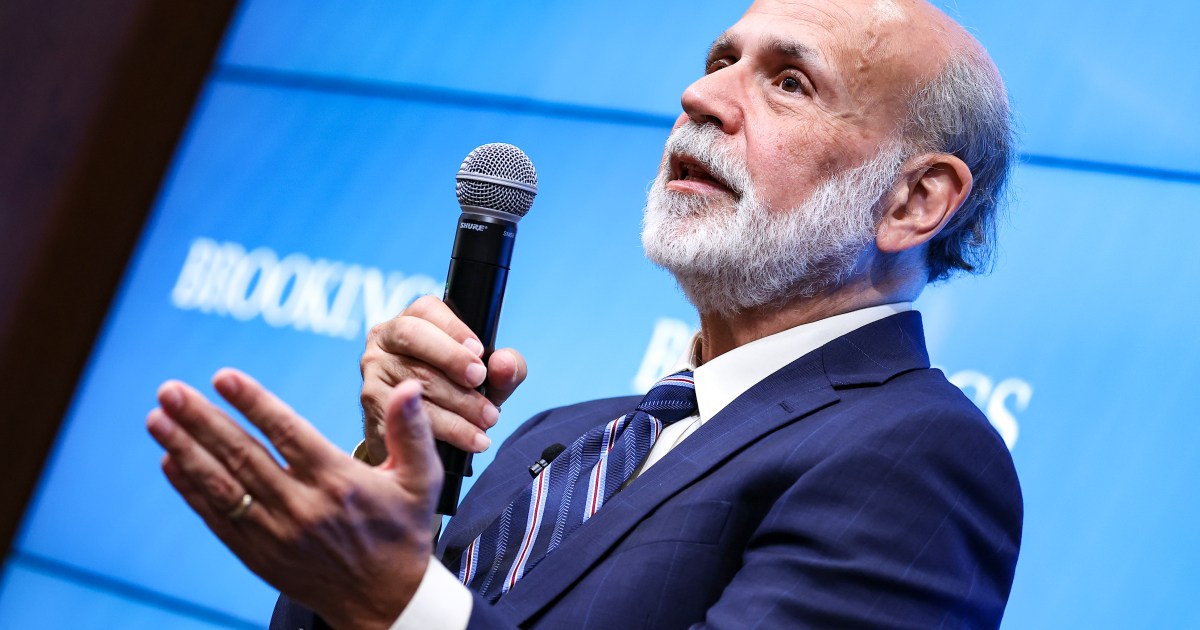 Ben Bernanke, distinguished senior fellow in residence with the Hutchins Center on Fiscal and Monetary Policy at Brookings, is among three winners of this year’s Nobel Prize in economic sciences. The Royal Swedish Academy of Sciences awarded the Sveriges Riksbank Prize in Economic Sciences in Memory of Alfred Nobel 2022 to Dr. Bernanke, Douglas Diamond, and Philip Dybvig for significantly improving our understanding of the role of banks in the economy, particularly during financial crises.

On Monday, October 10, the Brookings Institution hosted a press conference to hear his thoughts on the award and discuss his research on banks and financial crises.

The simple idea that the financial system can be a driver of economic activity and unemployment was not conventional wisdom at the time.

In the announcement, the Royal Swedish Academy of Sciences cited Bernanke’s 1983 American Economic Review paper on banking and the Great Depression. Bernanke noted that looking back on the study, although it looked “a little primitive,” it had many fruitful ideas. At the time he was working on it, “people didn’t think of the financial system as being an important part of the business cycle or an important part of what was driving the economy.” However, he argued in the paper “that developments in the financial system can have important macroeconomic effects. They can affect the business cycle, as well as of course creating major crises as we saw in 2008.”

The economics of asymmetric information

In good times when banks and borrowers are in strong financial condition, “the credit process is smooth, lending takes place, people are aware that credit is available should they need it, and that provides support for the economy.” In periods of crisis, the credit mechanisms break down, said Bernanke: “Nobody knows for sure who is solvent, nobody knows for sure what the wealth and collateral of other agents of the economy is, and that can create tremendous problems in the credit mechanism, and in turn have economic effects.”

He reflected on his more recent research published in the Brookings Papers on Economic Activity in 2018 which found very strong connections between the different phases of the global financial crisis and their effects on the American economy. His earlier research was put to the test when he was chairman of the Board of Governors of the Federal Reserve System from February 2006 through January 2014. In the Great Recession of 2007-09, problems in the financial sector caused problems in the real economy. In part because of his research, Bernanke says, “I strongly believed that [a financial meltdown] would bring down the rest of the economy.” So he came up with ways for the Fed to support the functioning of the financial system; he also worked to keep monetary policy expansionary to avoid deflation or disinflation which would have exacerbated financial distress.

At the end of his opening remarks, Bernanke said: “The world is a very complicated place, and models don’t have any room for politics… But it did help me to think about these issues in 2008.”

Questions from the audience

When asked if the reversal in the inflation risks suggest that there is less risk of those financial dynamics being created in today’s environment, Bernanke responded, “In the sense that homeowners have more equity in their home than they did two years ago, protects debtors from those problems.” And in good news, “Banks are better capitalized than they were in the global financial crisis, and therefore, should be better prepared to meet whatever challenges they face.” He noted that the term “banks” is used in this kind of literature loosely to mean any lender. However, in America, non-bank lenders, including so-called “shadow banks” play a large role. “When we look at the safety and soundness of the financial system, we should look not only at banks but also at non-bank lenders that were an important part of the problem in 2008,” said Bernanke.

While he didn’t have a specific risk to point to, he emphasized that “even if financial problems don’t begin an episode, over time if the episode makes financial conditions worse, they can add to the problem and can intensify it.” Bernanke said, “That’s something we need to pay close attention to,” as policymakers approach this moment of crisis.

Given how high inflation is and how painful it may be to get it down, Bernanke was asked if the 2% target was set too low. During his tenure at the Fed he sought to make the Fed and its processes more transparent, and inflation targets were an important part of the communications process. But, he says, “It was the inflation target itself that was important to me, not the number specifically.” He explained that the inflation target is a medium-term target and “it doesn’t need to be met all the time.” As the Fed’s policy actions begin to have their effects on the economy, the Fed can then make a decision about how quickly they need to get back down to the 2% target. “I think changing the target in the middle of a situation when inflation is well above the target would be not good for the Fed’s credibility overall.”

Dr. Bernanke has published many articles on a wide variety of economic issues, including monetary policy, macroeconomics, and economic history, and he is the author of several scholarly books and two textbooks.

Most recently, he published “21st Century Monetary Policy: The Federal Reserve from the Great Inflation to COVID-19,” explaining the Fed’s evolution over the past seventy years, showing how changes in the economy have driven the Fed’s innovations. He also lays out new challenges confronting the Fed, including the return of inflation, cryptocurrencies, increased risks of financial instability, and threats to its independence.

From February 2006 through January 2014, he was chairman of the Board of Governors of the Federal Reserve System, having been appointed to that position by both Presidents Bush and Obama. In 2017, he published “The Courage to Act: A Memoir of a Crisis and Its Aftermath,” recounting the 2008 financial crisis, providing an insider’s account of the policy response.

The Brookings Institution is financed through the support of a diverse array of foundations, corporations, governments, individuals, as well as an endowment. A list of donors can be found in our annual reports published online here. The findings, interpretations, and conclusions in this report are solely those of its author(s) and are not influenced by any donation.

10 Places to Find Free Firewood Near You & Online

10 Places to Find Free Firewood Near You & Online