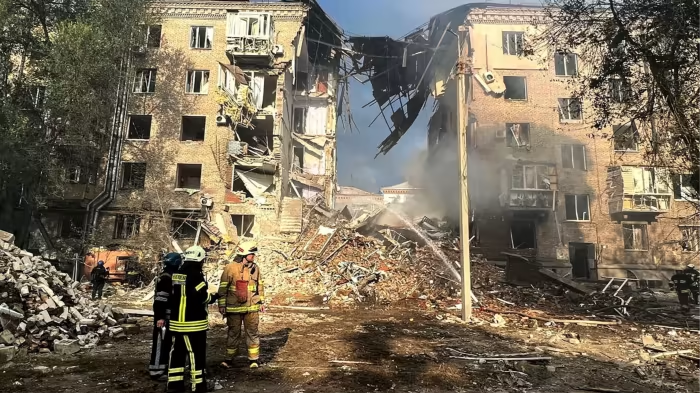 Good morning. This article is an on-site version of our FirstFT newsletter. Sign up to our Asia, Europe/Africa or Americas edition to get it sent straight to your inbox every weekday morning

Volodymyr Zelenskyy called on the G7 countries to speed up supplies of air defence systems after another day of a Russian missile barrage struck civilian and infrastructure targets across Ukraine.

The Ukrainian president’s plea came during a video conference held by the G7 leaders, including US president Joe Biden. Zelenskyy told the group Russia “has fired more than 100 cruise missiles and dozens of various drones” over the past two days, many hitting cities that have been free of attacks for months.

The second Russian fusillade appeared to be less intense than the nationwide bombings on Monday that left dozens of Ukrainian civilians dead in some of the country’s largest cities.

Russian president Vladimir Putin said strikes this week were ordered “at the defence ministry’s suggestion”, pointing to the newly appointed commander of Moscow’s invasion forces, Sergei Surovikin, a hardline general who has earned nicknames such as “the fierce one” and “General Armageddon”.

Do you think G7 countries should speed up supplies of air missile defence systems for Ukraine? Tell us in our latest poll. Thanks for reading FirstFT Asia. — Emily

Five more stories in the news

1. IMF forecasts ‘very painful’ outlook for global economy The IMF has said there is a growing risk that the global economy will slide into recession next year as households and businesses in most countries face “stormy waters”. A confluence of economic headwinds will lower global growth from 3.2 per cent in 2022 to 2.7 per cent next year, the fund predicted.

4. EU cautions Hong Kong on sanctioned Russian superyacht Hong Kong could be helping Russian billionaire Alexei Mordashov who has moored his superyacht in the city’s harbour evade EU sanctions, the bloc’s diplomats in the city warned after the Chinese territory said it would not be taking action against the ship.

5. Uber and Lyft slide after US proposes new gig work rule Shares in the largest gig economy companies in the US tumbled after the Biden administration proposed a rule that would make it more likely that gig workers will be classified as employees instead of independent contractors. Ride-hailing app Uber fell as much as 16.7 per cent, while shares in Lyft and DoorDash hit record lows during trading in New York on Tuesday.

Israeli officials discuss Lebanon deal Israel’s security cabinet and government will meet today to approve details of the deal with Lebanon over the nations’ maritime border. The country’s parliament will then have 14 days to review it before the deal returns to the government for final approval.

Nato meeting The group will host a meeting of western countries supplying arms to Ukraine today.

What else we’re reading

Kishida backs BoJ’s ultra-loose policy despite yen plunge In an interview with the Financial Times, Japanese prime minister Fumio Kishida said the Bank of Japan needed to maintain its policy until wages rose. Kishida said he would continue to “work closely” with Haruhiko Kuroda, ruling out speculation he would end the BoJ governor’s term prematurely.

China property crisis spoils Communist party’s triumph As China’s Communist party congress meets this weekend to celebrate its achievements over the past five years, economists will be watching for how Beijing plans to confront its most momentous economic challenge: its property crisis. The CCP congress could reveal some clues.

Ben & Jerry’s vs Unilever The ice cream maker’s decision to end its franchise deal in Israel to prevent its product from being sold in occupied Palestinian territories has placed it at odds with its parent company, turning a star acquisition into a legal nightmare for Unilever.

Mind the gap! What women need to know about investing In this Money Clinic Investment Masterclass, Emilie Bellet, founder of VestPod, talks to host FT consumer editor Claer Barrett about how to get started investing, when to start saving for a pension and why some of the myths around women investors are just that.

Why are we still obsessed with green? “The fashion industry didn’t invent our desire for green, it just read the room. It is surely not a coincidence that green is the decreed colour of environmentalism, something the fashion industry has an awkward relationship with,” writes Kate Finnigan.

Thank you for reading and remember you can add FirstFT to myFT. You can also elect to receive a FirstFT push notification every morning on the app. Send your recommendations and feedback to firstft@ft.com

Recommended newsletters for you

The Climate Graphic: Explained — Understanding the most important climate data of the week. Sign up here

Long Story Short — The biggest stories and best reads in one smart email. Sign up here

When the Family Is Abolished, People Starve

Bulk Buying – is it worth it?

Amazon Prime Early Access Sale 2022, Day One: All The Best Deals So Far!!

Bulk Buying – is it worth it?

Amazon Prime Early Access Sale 2022, Day One: All The Best Deals So Far!!