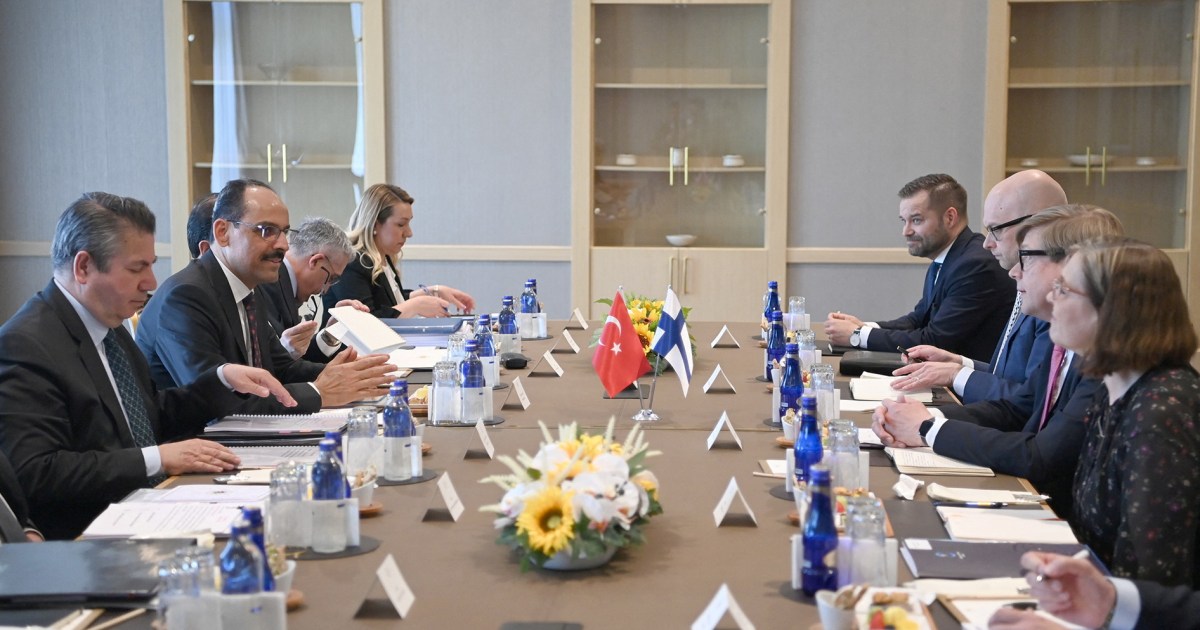 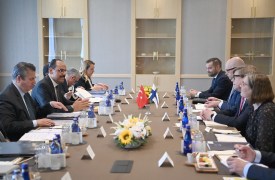 Turkey’s opposition to Sweden and Finland joining the North Atlantic Treaty Organization (NATO) in the wake of Russia’s war on Ukraine has elevated the Kurdish question on the international stage. President Recep Tayyip Erdoğan is attempting to capitalize on the urgency of fortifying Western deterrence by increasing the pressure on the Kurdistan Workers’ Party (PKK). The insurgent group has fought the Turkish state for five decades to secure greater rights for Turkey’s Kurds but enjoyed a rapid ascension with the onset of the Syrian civil war and Washington’s 2014 decision to partner with its sister organization to defeat the Islamic State group (IS).

The PKK has constituted a major component of Turkey’s relationship with Europe and the United States for decades, and Erdoğan has initiated several military campaigns into Syria’s northeast to suppress the autonomous enclave the PKK’s sister organization, the Peoples’ Protection Units (YPG), formed in the midst of the civil war. While Turkey may be using the Nordic NATO accession talks to receive Western backing for another campaign, it has a long record of carrying out cross-border incursions against the PKK and Erdoğan may also be trying to secure other concessions, including the lifting of embargoes on Turkey’s defense industry.

But Ankara’s opposition to Swedish and Finnish accession, based on their refusal to extradite PKK members, as well as followers of the Islamic cleric Fethullah Gülen (whom Ankara accuses of instigating a 2016 coup attempt), highlights that the Kurdish question cannot be decoupled from Western security interests. The tectonic shifts that have taken place in the global security order since Russia invaded Ukraine means that the second-order effects of the war against IS and the proximity of the Kurdish question to U.S. and European security interests requires a reprioritization of the issue in the West.

Turkey’s conflict with the PKK has long complicated Turkey’s relations with the U.S. and its European allies. Relations have been in flux and either enhanced or upended by shifting fault lines in the Middle East since the 2011 Arab uprisings and the emergence of IS. Although the 2013 peace process between the Turkish state and the PKK raised hopes of a lasting settlement, the fragile truce was upended in 2015 by the YPG’s ascension in Syria, its refusal to prioritize the fall of the Assad regime, and deep-seated animosities. The result was a renewal of a domestic conflict that has taken on multiple transnational dimensions and produced untold humanitarian crises.

Ankara has for decades questioned Europe’s commitment to addressing its security concerns. In the 1990s, Greece and Italy provided refuge to the PKK’s imprisoned founder and leader, Abdullah Öcalan, and the PKK established an expansive infrastructure, including in Sweden, that allows it to mobilize supporters and resources in Europe and in Turkey. European leaders had hoped to leverage Turkey’s EU accession process to improve Turkey’s human rights records but talks stagnated more than a decade ago and both sides have effectively given up on it.

Similarly, in addition to supporting the YPG, the U.S. has provoked Erdoğan’s ire by refusing to extradite the Pennsylvania-based Gülen, while Washington also imposed tariffs on Turkish steel and aluminium after an agreement to release pastor Andrew Brunson fell through in 2018. Ankara did U.S.-Turkey relations no favours by purchasing Russian air defense systems, after which Washington imposed sanctions on Turkey.

Turkey’s relations with the West will continue to be crisis-driven amid a range of ongoing tensions, including over the conflict in Libya, the eastern Mediterranean crisis, tensions with the EU over the future of 3 million Syrian refugees in Turkey, and NATO expansion in response to Russia’s aggression. Putting Turkish responsibility for the current state of affairs to one side, the trans-Atlantic alliance is guilty of failing to establish forward-looking approaches to tumult in Turkey’s Middle Eastern neighborhood, opting instead for incoherent and reactive engagement that has put issues like the PKK conflict and broader Kurdish political questions on the back burner.

The failure to mitigate the second-order effects of policies designed to address security threats like IS has allowed Ankara to exploit the West’s failure to balance the imperative of securing the defeat of the jihadis with the need to manage the security interests of regional actors like Turkey. This has had serious strategic implications, as evidenced by the current dispute over NATO membership and the pressure NATO has faced as a result of the ebb in relations and disputes over the YPG’s dominance in Syria.

Washington’s preoccupation with Russia, China, and Iran, combined with Erdoğan’s combative approach to the West and wider fatigue over Turkey’s foreign policy, means that it is difficult to foresee a political climate that could enable a proactive U.S. effort to reverse the deteriorating state of relations with Turkey –– even if, ultimately, the Biden administration will need to grant Ankara concessions to secure support for the NATO expansion.

However, this may be the moment for Europe to alleviate the strategic fault lines. Although some European countries like France have also embraced the YPG, perceptions of U.S. betrayal in Turkey run deeper and have developed and crystalized over the course of a decade of tumult since the 2011 Arab uprisings. Europe presents Turkey with a different set of dynamics. The EU is by far Turkey’s largest trading partner: in 2020, 33.4% of Turkey’s imports came from the EU and 41.3% of the country’s exports went to the bloc. Total trade between the EU and Turkey that year amounted to €132.4 billion. There are, therefore, limits to how low Turkey-EU relations can go, particularly when considering the dire straits of the Turkish economy.

While 58% of the Turkish public believe the U.S. constitutes the biggest threat to Turkey, 60% favour closer ties to the EU and Turks believe the EU’s effectiveness for solving global problems is more likely to produce favourable results for humanity. Such dynamics could empower Europe to dial down tensions over NATO and address questions surrounding the future of the PKK’s relationship with the U.S.-led anti-IS coalition, within which a number of European countries are key players.

The West must engage Turkey within the confines of the country’s political landscape as it approaches its 2023 elections. There will be limited space to address Turkey’s status as a difficult NATO ally or Erdoğan’s combative engagement, and no space to revive the peace process with the PKK.

The U.S. and Europe could wait out their stormy relationship with Ankara until after the elections, but that banks on a far-from-certain Erdoğan defeat and the notion that it would result in an immediate change in Turkish foreign policy. Alternatively, the U.S. and Europe can start to think about ways to manage the crisis over the YPG to deescalate tensions, and establish much-needed confidence-building measures balancing the West’s dependency on the Kurdish fighters against IS with Turkey’s security concerns.

That will require Europe exercising leadership to establish, in coordination with Turkey and the U.S., a task force that includes personnel who have a track record of executing conflict resolution mechanisms, including ceasefires and peace-monitoring, power-sharing formulas, and revenue-sharing frameworks, which will be important in light of Washington’s decision to allow foreign investment in Syria’s northeast. It could signal to Ankara that the West is taking its concerns seriously, while also providing a space in which to find mutually beneficial outcomes for all stakeholders in the autonomous enclave.

The YPG has banked on European support to enhance its legitimacy, while the PKK has capitalized on such support, and strained Western relations with Turkey, to maintain its grassroots networks in European capitals. Europe, therefore, has sufficient leverage to condition its continued support for the YPG on the organization opening up political space for its local Kurdish rivals. Holding the YPG accountable and enabling Turkish political influence over the future of Syria’s northeast will weaken the case for further Turkish military offensives. However, the YPG and the PKK must make their own difficult decisions: it is only a matter of time until the U.S. deems them dispensable assets whose utility as an integral component of the anti-IS campaign is diminished. Russia’s invasion of Ukraine has reshuffled Western priorities.

Geopolitically, Turkey and the Iraqi army have launched military campaigns to dislodge the PKK from the town of Sinjar in northern Iraq, where the PKK’s partnership with Iranian proxy groups and rivalry with Iraqi Kurdistan’s ruling party, the Kurdistan Democratic Party (KDP), has hindered the anti-IS coalition and U.S. containment of Iran. A PKK withdrawal from Sinjar, per a United Nations-backed agreement, presents one less problem to manage.

The Kurds constitute the largest ethnic group in the Middle East seeking a state of their own, with half of the 40 million Kurds residing in Turkey. For Western policymakers, reprioritizing the Kurdish issue provides an opportunity to integrate policies to manage different but interlocked crises in Turkey, Syria, Iraq, and Ukraine, while bolstering NATO’s northern flank and reinforcing deterrence against Russia.